Because for the Latest M3 Mobile Legends (ML) Event Calendar, it shows the date and explanation of when this event will appear. Make sure you look at each date more clearly, so that later no one will miss the mission category that is present in this game.

Mobile Legends has released a lot of interesting events and also some things that you might find right now. Then there is the Latest M3 Mobile Legends (ML) Event Calendar, to explain to us all about the upcoming Events. Because for the Latest M3 Mobile Legends (ML) Event Calendar, it shows the date and explanation of when this event will appear. Make sure you look at each date more clearly, so that later no one will miss the mission category that is present in this game.

Of course, many Mobile Legends players can’t wait for this event, if they are really diligent in playing the game. Then some conditions will explain things to the players, so that later they can have cool prizes like this too.

This will even replace the position of the Mobile Legends Mega Sale Event Calendar, considering that the M3 tournament will soon appear. All things like that will indeed make players more excited about completing some of the newest Missions now. 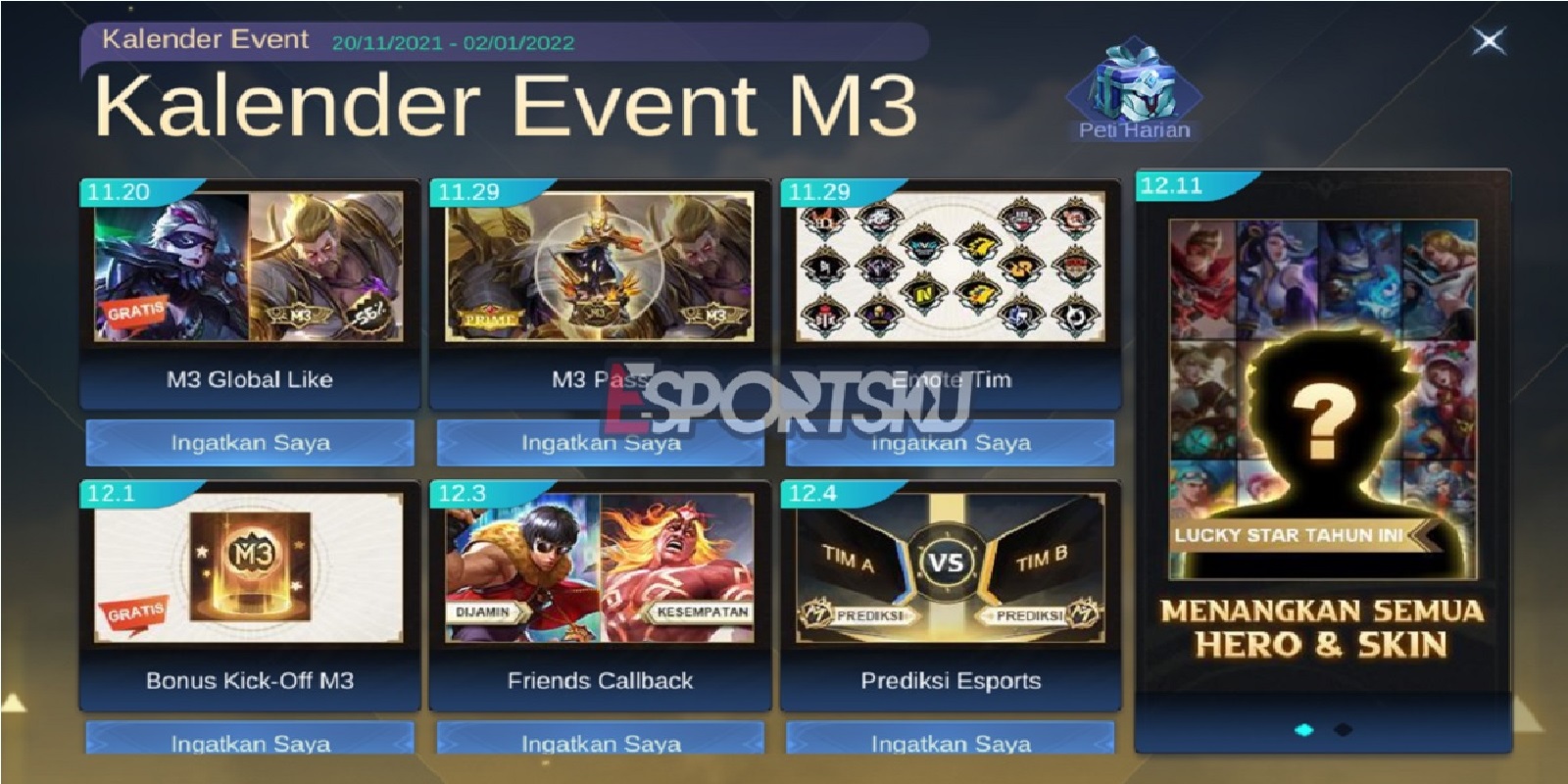 So for the earliest, this is an event entitled M3 Global Like, you can find the details of the event directly from the game. Starting on November 20, 2021 now, even later you will soon find many interesting things from the latest prizes.

You will later get a gift to change the newest special Roger Skin M3, even the return of the Natalia Black Mamba Skin. It will be the right combination for all of you, if it is 2 Users of the Hero who get this Free Skin gift.

It’s even reported that a big discount will appear at this first event, related to the latest Roger Skin from the special event. So if you really want and are hype with this event, you have to join immediately because you will make big profits.

Then Mobile Legends players will find another event called M3 Pass, it’s almost like M1 / 2 pass. However, the impressions and dates are definitely different, the prizes that you can get from the M3 Pass itself will be more and more cool.

Especially what you can get later, it turns out a new Skin related to Hero Belerick and also the M3 special Roger. Of course, if you want to increase the features of the M3 Pass, you must complete the mission, not much different from Stalight Membership.

However, if you have to remove the Diamond first before getting this feature, after getting it, we can finish it. It will definitely be a big profit if we can finish the M3 Pass because there is the newest Skin Roger Prime edition.

Its appearance is indeed quite surprising and very satisfying for all of us, but according to Esportksu it will be available for free. So just wait for the mission or on November 29, 2021, so you can confirm about the Latest M3 Team Emote that will be released.

What will the sound like in the Battle Emote later, whether it be a cool voice or just plain.

This will be a prize that is certainly quite satisfying for players, because from the M3 Kick-off Bonus there is a Spawn Effect. But some say this adds up again with the Special M3 Recall Effect, starting to become Free on December 1, 2021 later.

Because the start of the M3 Mobile Legends match is on that date, because at the beginning of course there will be special prizes. Just like the previous M1 or M2 Events, you will get a special new prize with the theme of a Kick-off tournament.

Make sure the players login on that date, to be able to receive every gift that has been present directly from this game as well.

Have a friend who has never played the Mobile Legends game? let’s invite them again on the M3 special Friends Callback. In this event, players will have a guarantee of getting Chou Hip Hop Boy Skin and also the opportunity for Lapu Vulcan Skin.

It’s very easy for you to complete events like this, just enter the game and start inviting friends directly. If you later complete the Friends Callback, then there are several prizes that you can receive in addition to the two skins.

Maybe it looks cool, because all of this is available for free and helps level up M3 Pass faster.

Predicting the team that will win from the M3 Esports Team that will compete later, will definitely be more enthusiastic about playing the game. Because some of these predictions or guesses are very clear, there will be several choices for you.

After you have chosen the team now, so that later you can get a Prize which is of course very profitable. There are several prizes that you might be able to receive, if you succeed in guessing one of the Teams so that you get some new things.

Make sure your team is chosen well, because this prediction must be from your heart that determines which team will win.

Excited for those of you who are ranked fighters in the Mobile Legends game, because there is a new Ranked Boost Event. So in this event there is a possibility that every player will receive an opportunity to get more Stars in Rank.

For example, once you win, you usually get 1 or 2, now you can get 2-4 for Ranked Mode. But things like this have not been explained for sure, actually M3 Ranked Boost for M3 Pass or Ranked Mode in the game.

But if you really get M3 Ranked Boost for Rank Mode, it’s very successful to push all day. It could be that it hasn’t been 2 hours, it’s already reached the Mythic that you originally played in the Epic Rank.

Then there is a Login Prize starting from December 6, 2021, reportedly more will get the Exp M3 Pass. So those of you who buy the M3 Pass in the Mobile Legends game now, maybe the progress and opportunities for the Prize are getting bigger too.

Make sure you just log in every day, so you can speed up this M3 Pass event to complete and receive the prize. The more new things, the better for the M3 Event Now and some conditions that we will see in the future as well.

On December 11, 2021, players will find out who the Lucky Star of the 2021 Mobile Legends game is. With this, the lucky player will be selected, then managed to get all the Free Mobile Legends Skins and Heroes.

Who doesn’t want to be chosen to be a lucky star now, because it will make you better than before too. Make sure for those of you who use the Lucky Star, but yes this is hockey because there are millions of people who play this game.

Who doesn’t want a Free Event Skin on the M3 Event Calendar? Of course, the Free Winter Box Token will be available in December 2021. From that section, it is clear that players can find this Winter Box Token right now.

Later, you can have the Free Token directly, if you really want to make the Free Token Winter Box, yes. Complete the mission, because it only lasts 2 days and if you miss it, you definitely won’t be able to get this Free Token.

Next you will get a Nostalgic mission to get Skin through a special Mission. By completing Missions like this, you will receive a Normal Skin from some selected Heroes that you may like too.

Moreover, in this event too, there are a special Nostalgic Border for you to finish immediately in this Event.

You will get an XP M3 Pass from Login and a Team Star Protection for Free from this M3 Finals. With these gifts and ways to be able to receive the prizes, it will definitely provide a reward that is quite satisfying for us to get later.

Don’t miss the Weekly Party that will happen at M3 Mobile Legends this time, about prizes? make no mistake because there are some permanent and free things from this event.

Maybe you should be even more excited when playing it, so that none of these prizes will be missed at all. Because the more prizes the player will find, the more memorable the gameplay of this game will be.

After knowing the Latest M3 Mobile Legends (ML) Event Calendar, it is indeed one of the events that you must try. Because some things might include a reward event that is so satisfying, so that you will be even more enthusiastic later. Keep practicing, play wisely and don’t become a toxic player!

How much is the price of Kagura Water Lily skin in Mobile Legends? (ML)