On this occasion, Esportsku will provide an explanation of the strengths and weaknesses of the Ruby hero in Mobile Legends.

The ability of the Ruby hero can be said to be very good, especially in countering the opponent’s hero in Mobile Legends. By using the scythe in his hand, Ruby is able to attract opponents and give attacks that are arguably quite annoying. This hero was very active, especially during the MPL ID Season 6 tournament yesterday. Now to find out the advantages and disadvantages of Ruby heroes, we will review them below. 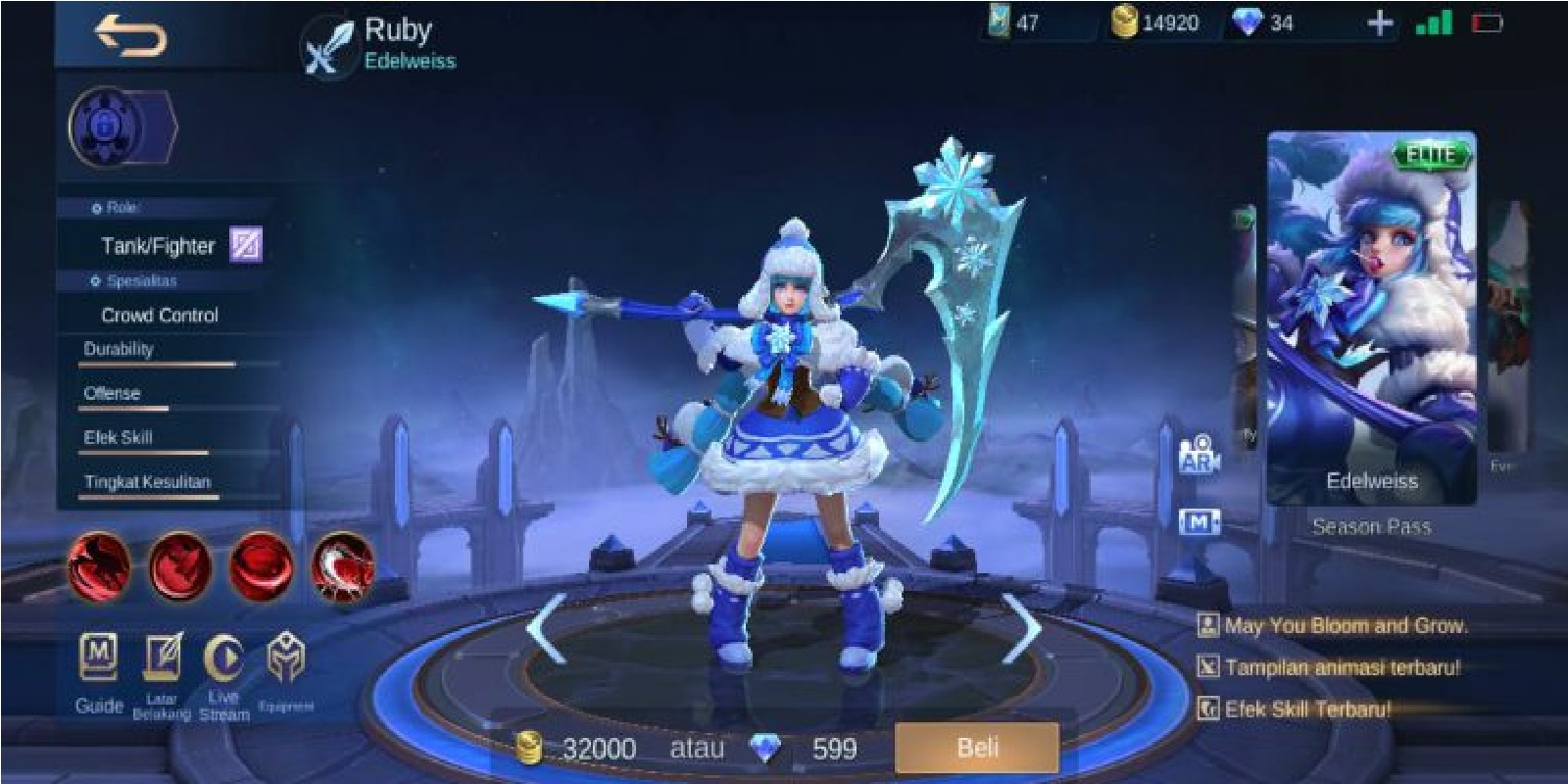 Ruby has the advantage of Crowd Control which is quite annoying. Surely you have received attacks from Ruby, right? Ruby’s second skill ability which provides a CC effect that is effective enough to stop the opponent’s movement. Not only that, Ruby is also very agile in moving so it is quite difficult to provide counter attacks. This Crowd Control ability is a mainstay of Ruby heroes when played in Mobile Legends.

Ruby also has excellent initiation skills in Mobile Legends. This ability lies in the ultimate it has. Even though this one skill is quite difficult to use and relies heavily on the right timing, its ability itself is able to stop the movements of all opponents who are hit by the attack. Especially by using flicker, you are able to make this attack even better.

Very Easy To Use For Beginners

Using the Ruby hero is actually quite easy to play. Ruby attacks can also be said to be simple, Ruby’s first skill which gives a sickle incision towards the front, the second skill which gives a rotating effect and CC on the opponent and the ultimate skill that attracts the opponent in front of him. This one hero is quite friendly to play but has a special combo that is arguably quite difficult, like the flicker + ultimate combo which requires very good timing.

The lifesteal ability is an advantage that Ruby has, arguably the most swift among other heroes. Even with Alucard’s hero at once. This lifesteal is obtained from Ruby’s passive ability as well as the additional items used. With this lifesteal ability, you are able to fill up your HP from dying to full with just one skill use.

As a tank fighter hero, Ruby is certainly a very good teamfight specialist, this one hero is so tanky and you can rely on all battlefields in the Land of Dawn. You can use the Ruby hero as a tank or offlaner. With various items such as full tank or full damage. 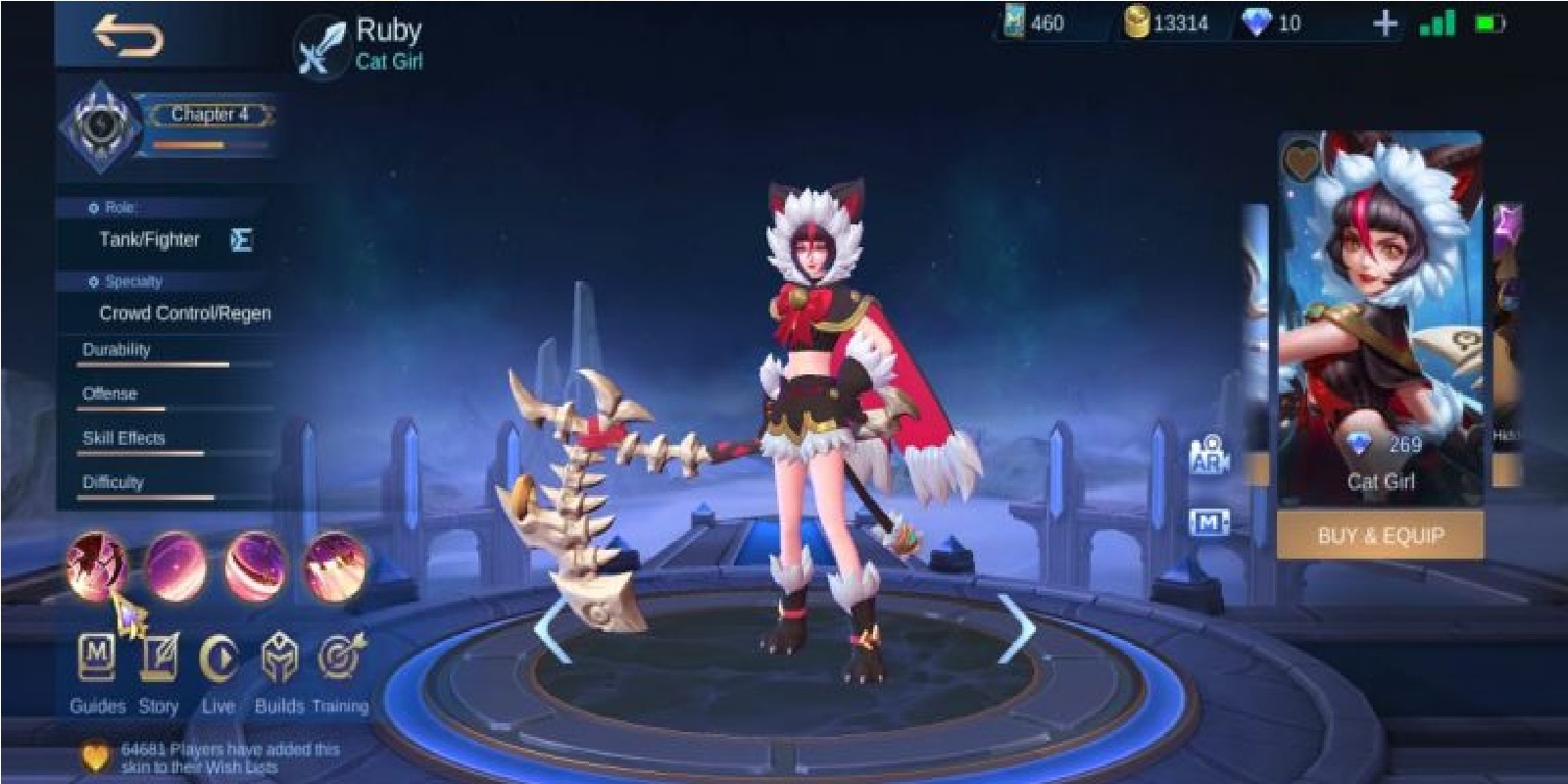 As a fighter hero, Ruby can say that the damage is very small. This is different from other fighter tank heroes such as Barats, Hilda, and even Balmond. That’s why so many Ruby users use this one hero as a Support Tank with excellent durability making this one hero very popular in the current Mobile Legends meta.

Skill Escape Mechanism which is quite awkward

Ruby only has Escape skills that are found after using the skills it has. After using skill 1, skill 2 and skill three, Ruby will move in the specified direction. This ability is the same as hero Wanwan. However, this one escape ability can be said to be very responsible when used during a team fight. That’s why quite a lot of Ruby users use flicker as their flagship battle spell to reduce Ruby weaknesses on this one.

Very Weak in the Early Game

The weakness of the next Ruby hero is having to rely on the right timing if you want to use Ruby’s special abilities. This special ability is the ultimate skill combined with flicker. This use certainly requires finger speed and the right time to use it.

That’s it for a review of the strengths and weaknesses of the Ruby hero in the Mobile Legends game. Hopefully the above reviews can be useful especially for those of you who are fighter users in Mobile Legends Don’t forget to keep practicing, play wisely and don’t become a toxic player!