On this occasion, Esportsku will provide information about the strengths and weaknesses of Zhask Mobile Legends.

Although unfortunately in season 19, Zhask is not very popular and widely played, but as a mage hero user, of course you need information about the strengths and weaknesses of Zhask Mobile Legends, this is so that you can master the hero easily.

The Strengths of Zhask Mobile Legends 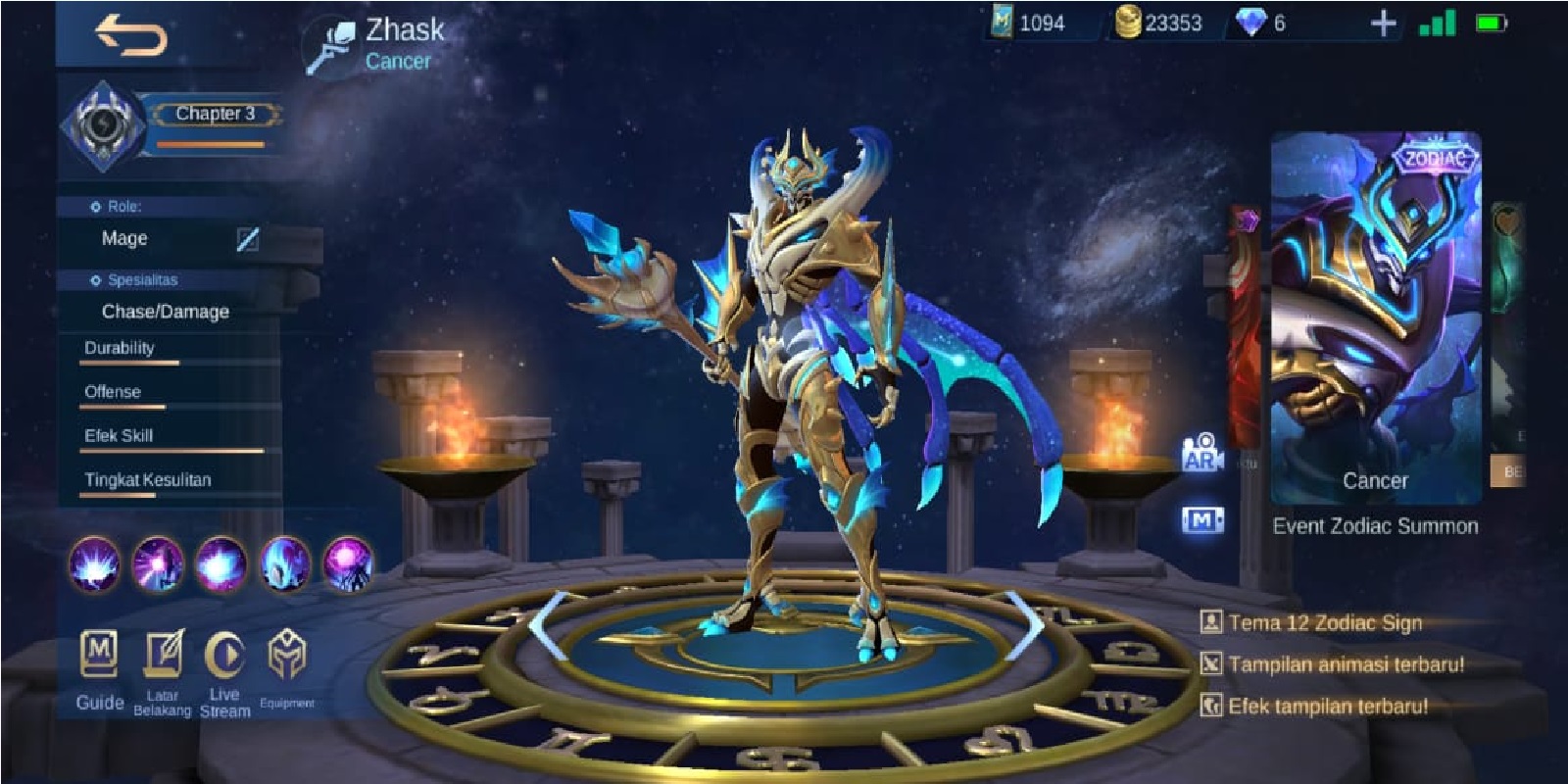 This ability is often played by Zhask as an offlaner who is very focused on doing split push in a lane. Usually if someone uses Zhask they don’t often teamfight and only focus on destroying the turret.

HAVE 2 HP at once

What is quite unique for Zhask is his ability to have 2 HP at once. This ability of course gives this hero Zhask himself, making it difficult to beat in a game in Mobile Legends.

Zhask is a tough hero thanks to this ability, even though this one hero does not have good mobility and relatively low HP, even though you can handle it by using the ultimate, which can make him have double HP.

Has a high attack speed

The next weakness of Zhask is the very high attack speed for a mage. This is very different from other heroes. Which of course you are very lucky in attacking your opponent. The faster the attack speed, of course, the greater the damage the enemy will receive.

That way, Zhask himself relies heavily on items that have attack speed abilities. This can help it as a very fast burst damage, but unfortunately it doesn’t have that much damage so it only uses that attack speed.

Zhask itself is quite high damage thanks to the combination of attacks it has. Even though it is not that big, the damage ability of Zhask is helped thanks to the attack speed it has.

The zhask attack itself is in the form of an electric attack like a laser that can attack one opponent’s hero, the faster the attack speed, the more damage the opponent receives and makes him sicker.

Zhask is one of the heroes that is hard to beat thanks to his ability to move to the pawns that can be generated with his first skill. This method he can do when Zhask is now, he can move to a pawn quickly and give him a second HP.

This one ability is very unique and can make Zhask even difficult to beat. Having two HP which is very useful in team fights, this one hero can survive in a team fight for quite a long time. 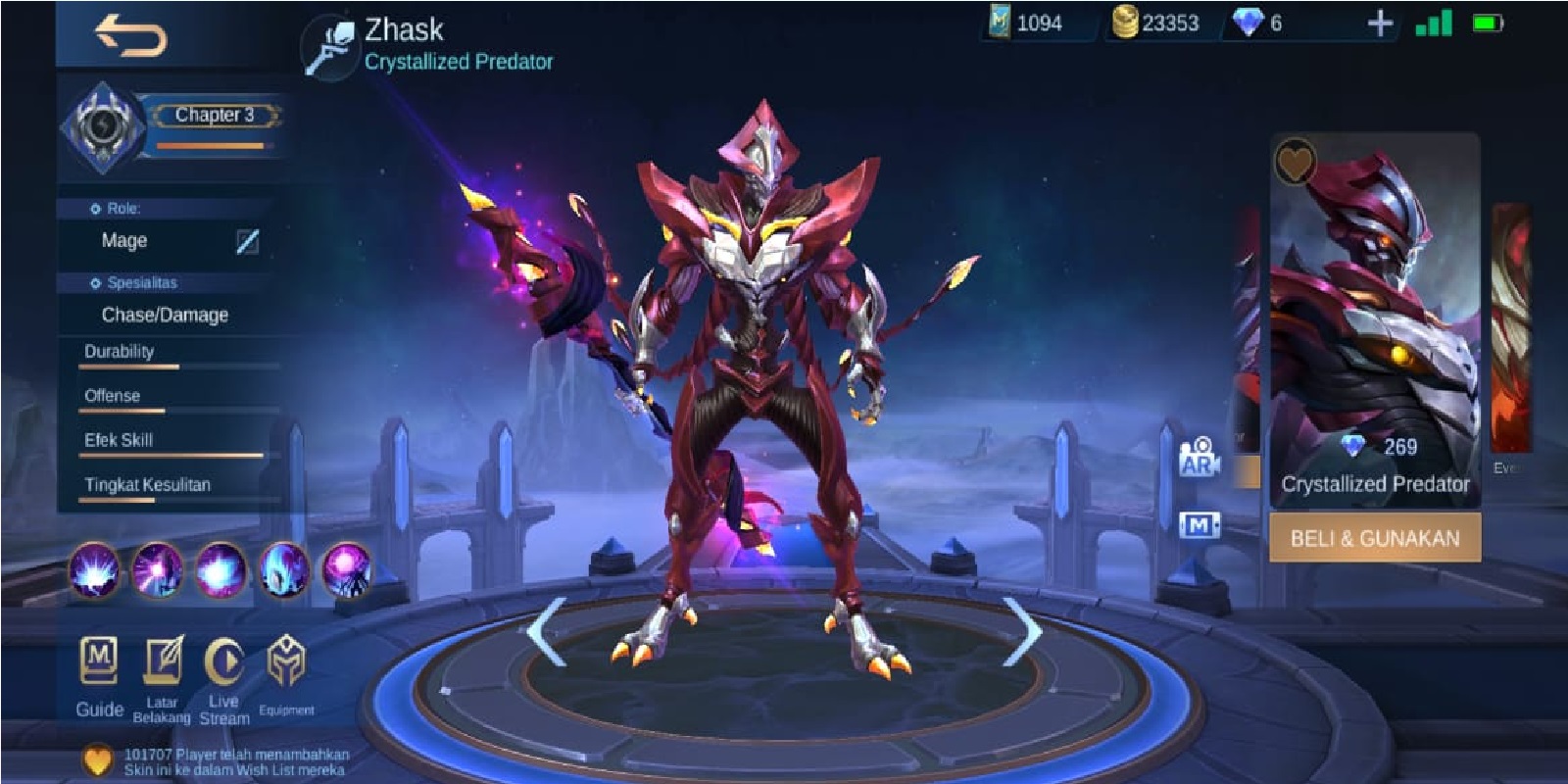 Hero that is quite complicated to play

The first weakness of Zhask is that it is difficult to play. This is because Zhask has four skills that are fairly difficult to combine for those of you who have played it several times. Of course this makes beginners think twice about playing Zhask.

For example, Zhask’s first skill summons a pawn that can be mixed with the ultimate, then the three-two skill that delivers a laser attack, the third skill that attacks by giving CC to the opponent. All of these skills are fairly difficult for a beginner to master.

The next weakness is the ability to bear Crowd Control which can only be obtained by using the third skill. This attack provides a safe ball if the opponent steps on the ball it will have a slow effect.

The CC ability is fairly limited, not only is CC a slow effect, but the range of the attack itself is not that big. Of course this is very bearable for a mage hero like Zhask.

The next weakness of Zhask is in its attack which is only a single target. This ability is indeed not very useful when teamfight, this makes teamfight run for quite a long time.

However, by only focusing on one attack, the Zhask can deal great damage, especially if you focus on attacking the core hero first.

Each skill set from the hero Zhask itself is very wasteful. Therefore, for those of you who are Zhask users, you should always use which item regen to handle it. With which one is limited, of course you cannot spam skills which are the main attacks for hero Zhask.

The next weakness is its very low mobility. Zhask also does not have the skills to escape if hit by a gang. This is a mistake in itself because the mage hero is very vulnerable to opponent ganking.

Therefore Zhask relies heavily on battle spell flicker or sprint which can make him escape from the opponent’s ganking attacks. So what is certain is that you are very obliged to use both battle spells when playing hero Zhask.

That’s all the strengths and weaknesses of Zhask Mobile Legends. Hopefully, the presence of the reviews above can be useful especially for those of you who are Mobile Legends gamers. Don’t forget to keep practicing, play wisely and don’t become a toxic player!