So that you are even better at playing the Phoveus hero. In the following Esportsku, I will provide a tutorial on how to play using the best Phoveus heroes in Mobile Legends. Please listen carefully!

As a new hero, some players may experience difficulties when trying out the Phoveus hero. This fighter hero is quite complicated because he is a hero who looks like an assassin.

Moreover, the specialty itself is Magic Damage which is the same as Esmeralda and Guinevere, so the tutorial on using Phoveus heroes is different from other physical fighter heroes in general.

But what’s interesting is that this OP hero Phoveus is given free of charge by Moonton, so that all players can have this hero, and of course want to try to master it right away. 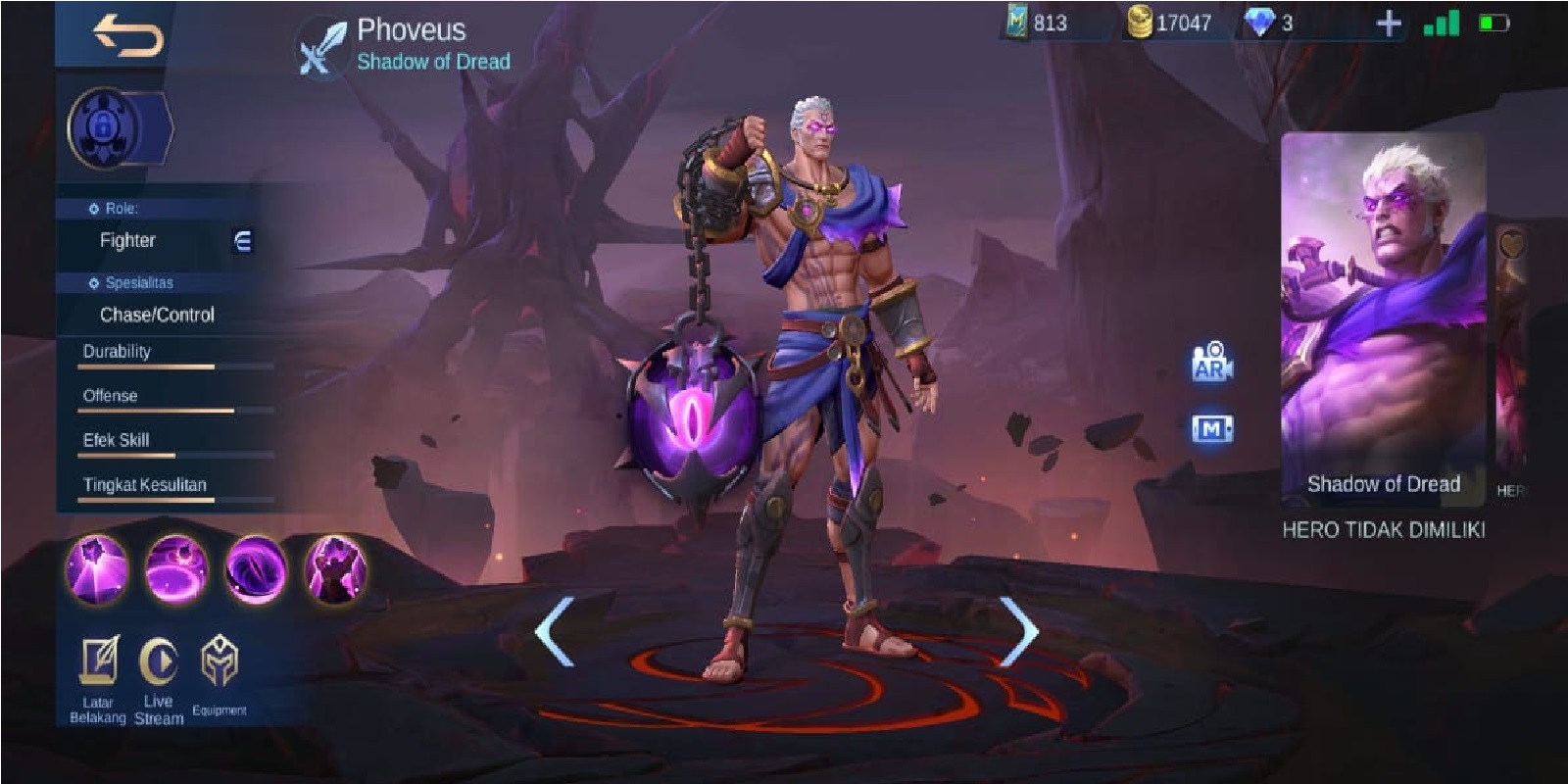 Of course, the first thing is to know the skills Phoveus possesses. This knowledge is the first that you must pay attention to.

Phoveus will hit the ground to inflict damage on the opponent. When it hits your opponent using this skill. Phoveus will get a shield that can increase movement speed.

When the opposing hero, creep or Phoveus touches it, it will spread out once again and give additional damage attacks.

Next, Phoveus’ second skill will summon Astaros Eye. In a short time, Astaros Eye will start to shrink and draw all the opponents in it to the center. as well as dealing damage to them.

Every time an opponent uses blink or charge skills, Phoveus can move to their location quickly to launch a strong attack and get a shield.

This ability can be used repeatedly for 12 seconds if the usage requirements are met.

Now after knowing and understanding about Phoveus ‘hero skills, next, please use Phoveus’ hero attributes starting from emblems, build items and also the best battle spells.

Please use some recommendations for emblems, build items to battle spells that we will recommend for those of you who want to play Phoveus to make it even stronger.

Phoveus is also very reliable river jungler hero, for this you can use retribution, then use flicker or arrival if you are an offlaner. As for execute and flameshot, you can use it as you like.

Phoveus is also very good for using build magic items, which as a fighter hero, he has a magic damage specialty.

Just like Guinevere and Esmeralda, the ability to use magic items is very strong and can deal very high damage.

Don’t forget to use some defense items, because, as a fighter, Phoveus often advances to give initiations, and will certainly be the target of the opposing hero. This hero must have good sustain ability.

Use the first 3 points to the Mastery, the goal is to get Phoveus to get 5% CD, so that his skill abilities will always be active.

Specialty CD will also help with Phoveus hero passive abilities, so that you have a high CD, you can also use additional items.

Use free talent, be it Magic Shop, Magic Worship and Impure Rage.

Here are some combination skills from the Phoveus hero that you can apply to the Mobile Legends game.

Phoveus will attack using the Astaros Eye, the hit opponent will get CC and pull him into it.

This attack is similar to Diggie’s second skill, then after your opponent is interested, you can attack using his first skill 1, Maletif Terror to give a big attack.

Malefic Terror will provide a very large attack with AoE attack effects, this type of attack has a large area. Use this combo if your ultimate is on cooldown.

This combo also makes it a way for Phoveus to activate the ultimate, Phoveus heroes are the same as Wanwan whose ultimate skills can’t always be used.

To activate the ultimate Phoveus skill, you have to mark or mark your opponent using the Astaros Eye or both skills.

After the opponent is marked, the ultimate skill can be used and Phoveus will give a blink attack towards his opponent.

This skill can be used several times, and is suitable for targeting agile heroes like Ling, Fanny to Hayabusa.

First, of course you already know the steps above, starting from items, battle spells and also emblems at the beginning of the game. Especially when the draft pick starts.

Continue after entering the game. Generally, Phoveus is used as an offlaner, therefore, we will give Phoveus gameplay as an offlaner.

In the early game you can play casually, make sure to clean the creep first and collect level up to 4. After level reaches 4, and your ultimate is unlocked.

Next you can roam, go to the mid game and help your teammates. But don’t let your guard down and leave your turret alone.

Using arrival will be very good if you frequently roam. Or if not, you can also stay on the lane like an ordinary offlaner.

For battle spells you can use flameshot, flicker or execute.

In the mid game, in general, Phoveus already has several items that have been purchased. Mid game takes place at 8 to 12-16 minutes, after the lord appears.

Try to always contribute in every team fight. Attack your opponent wherever they are.

Aim for the enemy mage hero or their hero core. Use the second skill first to mark the opponent, then attack using the ultimate repeatedly until the opponent loses.

The Phoveus hero attack combo is fairly strong and deadly, generally in just a few attacks, Phoveus is completely able to defeat its target.

Using Phoveus, don’t actually wait for the late game. Especially if you use Magic items.

This is a distinct advantage for Phoveus, some heroes with mage builds, usually they can only play effectively in the early to mid game.

First, make sure Phoveus doesn’t play offside, as a hero who can lock up your opponent, you become an ace for the team.

Try to target the core hero first when the team fight begins. If possible, you can sacrifice, as long as your core hero loses, then Phoveus doesn’t matter if he is beaten and lost.

In conclusion, during the late game, you must really be able to target your opponent’s core hero first, so that the core hero cannot participate in team fight. The last task, leave it to your marksman hero.

Now with some of the reviews above, surely you are really able to use the Phoveus hero in Mobile Legends.

As a fighter hero, this one hero is quite complicated to play, with several ways to use the Phoveus hero in my Esports version of Mobile Legends. As a beginner you will immediately be good at playing it.

Hopefully the above reviews can be useful and useful for those of you who want to learn to play using the Phoveus hero in Mobile Legends. Keep practicing, play wisely and don’t become a toxic player!

How to Get Rare Border 2021 for Free Mobile Legends (ML)